Long Island Jobs with Justice would like to invite you to spend an evening with us on Tuesday, September 27th as we honor and celebrate our partners in the fight for workers’ rights and economic justice!

Long Island Immigration Clinic – a project of The Sisters of St. Joseph

You can purchase tickets and sponsorships online for the event here (preferred): https://bit.ly/3PEI9vg

If you are unable to attend but would like to make a one-time donation, you can do that here: https://longislandjwj.org/donate/

You can also download and print the invitation and RSVP form and mail to: Long Island Jobs with Justice, 390 Rabro Drive, Hauppauge, NY 11788

We are honored to be able to celebrate our partners and all of the work they’ve done to support workers across Long Island.

We look forward to seeing YOU!

Due to rising infection rates and an abundance of caution for everyone’s health and safety, we’ve will postponing our Human Rights Luncheon. We apologize for the unfortunate news, but look forward to sharing a new date with you all in the upcoming weeks. Please continue to check back here for a new date.

If you purchased a ticket and would like us to issue you a refund, please contact Ani Halasz at ahalasz.lijwj@gmail.com. Otherwise we will hold your spot for the new date.

Celebrating an historic victory for worker justice – the unionization of farm workers at the Pindar Vineyards in Peconic, Long Island

The fight to unionize farmworkers — who are often excluded from labor laws that apply to other workers — goes back to the National Labor Relations Act of 1935, signed into law by President Franklin Roosevelt. This law, also called the Wagner Act, allowed workers to unionize and prevented employers from retaliating against workers who joined a union — with the exception of agricultural or domestic workers. At the time, many of these workers were Black and Roosevelt had compromised on the law with the Southern Democrats, who wanted to continue discriminating against and oppressing people of color.

On July 19th, 2019, after nearly 2 decades of political advocacy and organizing, and over 8 decades of racist and exclusionary laws, agricultural workers in New York won the right to organize a union, a mandatory day of rest and the right to overtime pay through the passage of the Farm Laborers Fair Labor Practices Act!

On September 27th, 2021, Local 338 of the Retail, Wholesale, Department Store Union/United Food and Commercial Workers Union was certified by the state as the first union to represent more than a dozen farm workers at Pindar Vineyards in Peconic!

Join us on Sunday, January 9th from 1pm-2:30pm as we celebrate this historic victory for farm workers, unions and Long Island, and honor Senator Jessica Ramos, sponsor of the 2019 Farm Laborers Fair Labor Practices Act, and the remarkable and inspiring partnership between Rural and Migrant Ministry and RWDSU/UFCW Local 338.

SPACE IS LIMITED TO 85 ATTENDEES!

If you would like to become an event sponsor or take out an ad in our program, you can find sponsorship package options on the registration form above

If you take an extra step today by becoming a monthly sustainer of Long Island Jobs with Justice, you can get FREE admission to the event and a bottle of union-made Pindar wine. Give what you comfortably can – current monthly donors range from $5-100/month. A little bit every month adds up to a very meaningful impact on our work to protect working people. Simply click “recurring” when you donate. Become a sustainer today!

As we continue to go about our everyday lives in this environment of uncertainty, one certainty is that the work for justice continues.

Long Island Jobs with Justice would like to invite you to spend an evening with us at our awards dinner, where we will return in person to reconnect after nearly 1.5 years!

For better or for worse, this year has been unforgettable. Living through the pandemic has exposed some uncomfortable truths about our society, and while we are grateful for Zoom and the ability to continue our advocacy, there is no replacement for connecting with everyone in person.

We hope you can join us on Wednesday, August 4th at Captain Bill’s in Bay Shore as we honor the remarkable work and courage of essential workers and the advocates that have stood shoulder to shoulder with them!

Our honorees for the evening include:

We are honored to be able to celebrate our partners and all of the work they’ve done to support workers across Long Island!

You can purchase tickets and sponsorships online for the event here (preferred): https://www.eventbrite.com/e/long-island-jobs-with-justice-awards-dinner-tickets-161644806969

You can also download and print this invitation and RSVP form and mail to: Long Island Jobs with Justice, 390 Rabro Drive, Hauppauge, NY 11788

If you are unable to attent but would like to make a one-time donation, you can do that here: https://longislandjwj.org/donate/

We look forward to seeing YOU! 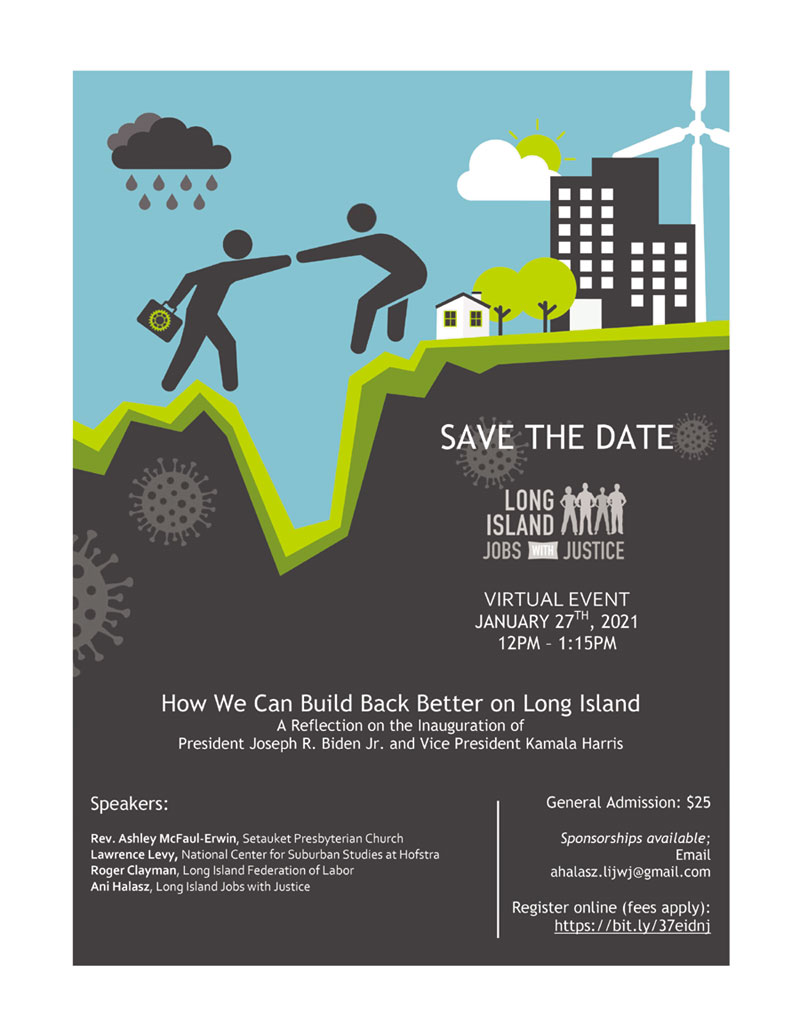 There are almost 100,000 undocumented immigrants on Long Island. Most have fled terrible violence and poverty in their homelands to start life anew in America. They are the classic immigrant story that has made America great. We don’t always know their legal status, but we see these immigrants every day in the work they do – work native-born Americans refuse to do such as washing cars or mowing lawns or picking crops in the field or cleaning homes and offices or caring for elderly Long Islanders. They are undocumented because, despite their many contributions to our economy, the federal government has failed for almost twenty years to enact Comprehensive Immigration Reform that would allow these needed workers to enter this country legally. 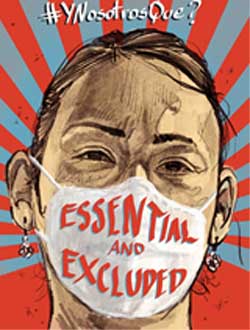 Advocate for The NYS Excluded Workers’ Fund
There is a solution. New York State Senator Jessica Ramos and Assembly member Carmen De La Rosa have introduced legislation (S8277/A10414) to establish a billionaire tax on financial investment gains that would raise $5 billion to create an Excluded Workers’ Fund – a supplement to New York State’s Unemployment Insurance – that would provide undocumented workers affected by COVID with up to $750 a week in unemployment benefits. In so doing, the fund would pump about $370 million into the Long Island economy each month as unemployed or underemployed undocumented immigrants spend the money they did not have before the fund was created.

Join us in a Car Caravan to Support the Excluded Workers’ Fund on Wednesday August 19th, assembling at Our Lady of the Miraculous Medal Church parking lot at 9:00 AM , 1434 Straight Path, Wyandanch for prompt departure at 10:00 AM for Brentwood. Please wear masks and bring signs and decorations for your car such as “Justice for the Excluded Immigrants” or “Immigrant Workers: Essential but Excluded” or a message of your own creation. The caravan is co-sponsored by Suffolk County Legislator Sam Gonzalez who spoke passionately in support of this fund at our July 30th commemoration of excluded workers. You can view his speech here: https://photos.app.goo.gl/ErVWvhvB6h6vVjSL6 . Brentwood and Central Islip, two heavily Latinx communities in Leg. Gonzalez’s district, have among the highest COVID infection rates on Long Island, exceeding 6500 cases, many of them excluded, undocumented immigrants. The caravan will conclude in Leg. Gonzalez’s legislative district with statements of support for the Excluded Workers’ Bill from elected officials, faith and community leaders.

On Monday, December 16th, a group of Lidl Best Market workers and Long Island Jobs with Justice released a report detailing the findings of a September 24th Workers’ Rights Board Hearing, where workers testified before a panel of community, faith and political leaders about the conditions of their workplace and their concern for the future of their jobs.

The following recommendations have been issued for Lidl’s immediate attention and response:

1. Treat all workers with dignity and respect by:

Paying all workers a living wage and providing benefits that are equal to local supermarket standards, including equivalent Sunday and holiday premium pay.

2. Be truthful and transparent with workers by:

Providing greater transparency to workers about the future of their jobs and opportunities for promotion and growth in the company.

Providing greater transparency to all workers about opportunities available for store transfers, promotion and growth in the company.

3. Offer a safe workplace for all workers by providing ongoing maintenance, repair and trainings

For nearly three years, workers at Best Market stores have been coming together to voice their concerns and improve conditions in their workplace. In November 2018, workers learned that Best Market sold their stores to a multinational corporation from Germany named Lidl. After the prior two years of fighting Best Market for better wages, stable hours and affordable benefits, workers were hopeful that their new employer Lidl, the fourth largest retailer in the industry, would do better. One year since Lidl’s acquisition, workers report little to no improvement.

Lidl is in the process of converting and re-bannering these Best Market stores to the predominant Lidl store operating model, which is no-frills shopping experience that presumably will require less staffing.

Despite Lidl telling workers that they will have an opportunity to keep their jobs, Lidl has not been clear about what this opportunity will look like long-term in terms of hours and work responsibilities. Lidl just opened its first re-bannered store of December 11th, 2019.